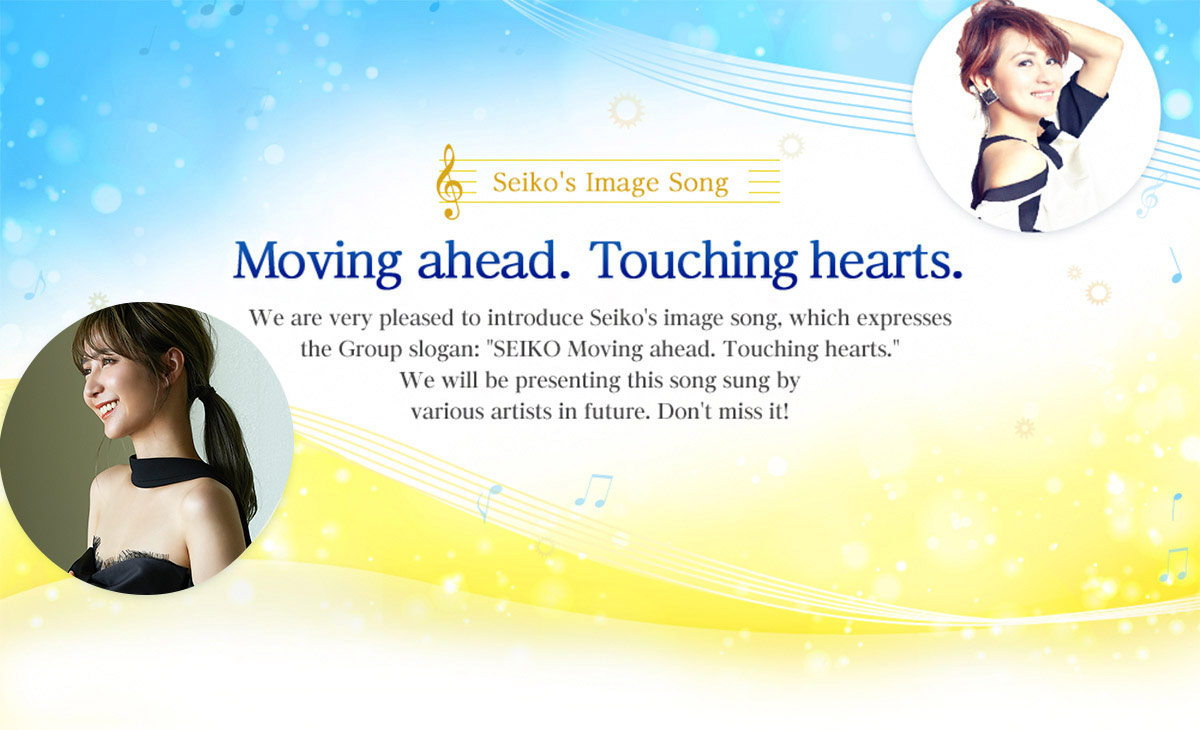 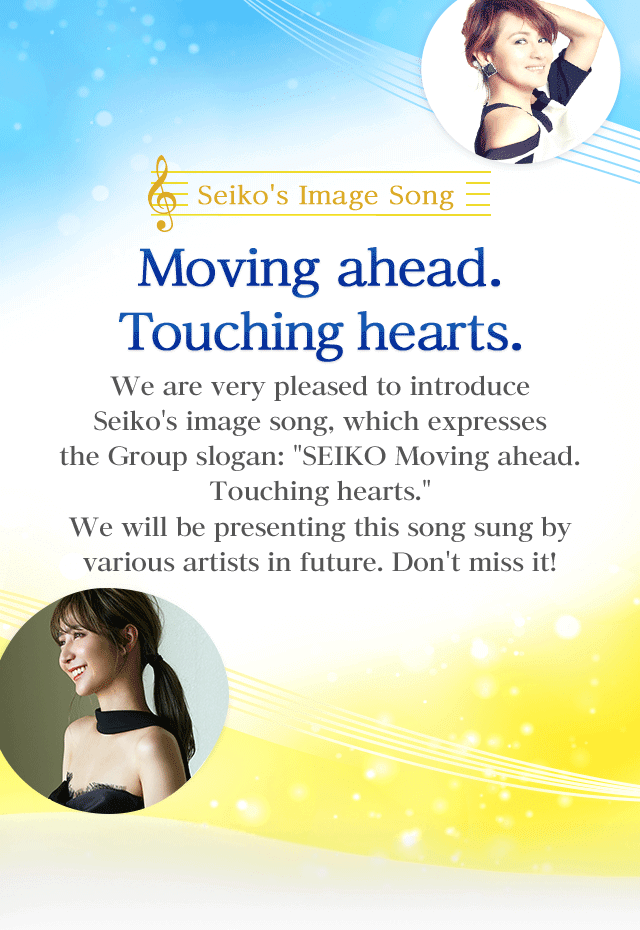 In May 2014, the group slogan was established. It expresses the Group's aspiration to become an entity that is always ahead of the times and resonates with customers' hearts by providing not only physical values but also emotional values such as playfulness, excitement and a sense of thrill.

Introduction of the Image Song

Since we decided to use the Group slogan proactively to develop a sense of employee unity and for PR activities targeting people outside the Group companies, we decided to produce a piece of music that fits the image of "SEIKO Moving ahead. Touching hearts." as part of our communication activities.
Centered on the Sound of 'Wa' Concert to support eastern Japan in a spirit of "harmony", this melody is used also in the TV programs presented by Seiko, "Sound Inn 'S'" and as the background music of the radio CM "Impressing the sensation on the mind," which was broadcast on radio programs sponsored by Seiko.
We will continue disseminating the Group slogan and image song in a variety of ways, in the hope that we will evoke happy excitement and a sense of thrill in people when they hear this music. We will continuously set the music as one of the axes of our branding activities under the Group slogan to further improve the brand image.

The image song is used as the background music in the brand music video "Art of Time" themed on the Group slogan: "SEIKO Moving ahead. Touching hearts."

Up to the Completion of the Image Song

Each and every employee thought about the theme song of the Seiko Holdings Group, which will be sung successively in 10 and 20 years' time, inspiring hopes and passions for the future of the Group's employees.
Employees were invited to create lyrics embodying the wishes of the Group, and they presented phrases based on the image of the Group slogan, "SEIKO Moving ahead. Touching hearts." to one another. The lyrics and phrases were arranged by professional songwriters into a lyric work expressing the wishes of the employees.
The lyrics was combined with the melody created by the Chairman & Group CEO, CCO, Shinji Hattori, arranged by professional composers/arrangers and completed as a piece of music.

In addition to Marlene, now Sarah Àlainn sings the image song. Please enjoy the two vocalists sing the same song in very different arrangements. Marlene express it in a jazzy style with her powerful voice whereas Sarah in a lighter swing with much higher pitch.

Sarah Àlainn is a multi-facetted artist originally from Sydney, Australia. She is vocalist, violinist, composer, copywriter, radio and TV host. She studied in Sydney Conservatorium of Music, University of Tokyo and graduated from the University of Sydney. She started her musical career by singing and writing lyrics for games and composed a song for the figure skater Yuzuru Hanyu's exhibition performance. Her popularity further increased when her debut album "Celeste" reached number 1 on the iTunes Japan Vocal Charts in 2012, then her second album hit number 1 in the Billboard Japan Classical Charts in 2014, followed by the number 1 success of the album "f" and "ANIMA" and the single "Little Doll." With a vocal range spanning over 3 octaves, Sarah's voice is proved to be therapeutically beneficial, by way of her voice containing 1/f fluctuations. Sarah has both perfect pitch and synesthesia (she sees sound as colors). Sarah is actively involved in supporting parasport initiatives. Her song 'Dream As One' is a parasports theme song in Japan. Sarah worked together with world prominent artists such as Grammy Award winning record producer David Foster, Vienna Boys' Choir, Andrea Bocellin, Peabo Bryson, and Ludovico Einaudi. Sarah currently hosts an English-language teaching show 'Kiso Eigo for Adult Learners' on the national broadcaster NHK TV. Sarah was chosen to sing the theme song 'Bring The Snow' in both English and Japanese to the feature film 'Moomins and The Winter Wonderland' released worldwide in December 2017. At the start of 2018 Sarah was chosen to sing the theme tune on NHK's prestigious drama 'Segodon'. Sarah became the presenter on NHK World's program 'Kabuki Kool' which introduced the art of Kabuki to a global audience. As a Good Will Ambassador for the Australian government, she presented 'Australia now' program that showcases contemporary Australia on the themes of Innovation, lifestyle and creativity.

The focus has been placed on cheerful and fresh tone.
To realize this, rhythm of light swing was chosen.
You can enjoy a unique interpretation in a rhythm similar to the one in George Shearing tunes that fits perfectly with Sarah's bright and suave voice.

With words written by the employees, the heartfelt Seiko theme song radiates positivity and solidarity. I went into the studio with a bright yellow outfit to match the uplifting lyrics.
I chose to sing in my native tongue English and after hearing that this would be played every morning in the office, I decided to start off with the chorus - 'With the start of a brand new day, moving ahead and touching hearts. We will shape the future'. What better way to start off the day with the company slogan!
Katsuhisa Hattori gave the arrangement a jazzy feel with a nod to 'Shearing'. We had such a blast!

The multi-talent diva Sarah and the music creator Katsuhisa Hattori produced together a brand new version of the image song in Hattori's arrangement.
The harmony of Sarah's English lyrics and melody of the instruments have made a song that is full of tenderness and playfulness.

Born in Manila, the Philippines. Came to Japan in 1978 and made her debut the following year. From the release of her first album in 1981, she was enthusiastically welcomed as a diva in the golden era of fusion music and released one hit song after another, including "Déjà vu" and "It's Magic." "Left Alone," the theme song of the Kadokawa movie "Cabaret" that was released in 1986, was ranked No.1 on the Western music chart of cable broadcasting, and the joint concert with its composer, Mal Waldron, also became a big hit. Her activities were not limited to Japan; she also held concerts and appeared in events in other Asian nations. In the 1990s, she made her album debut in the United States and also took on the challenge of musicals, breaking new ground. In 2009, the 30th anniversary of her debut in Japan, she released her first Latin jazz album, "Marlene sings Nettai Jazz," including a collaboration with the Tropical Jazz Big Band. In 2011 she released the album "Initial," which gave new life to the masterpieces of the 1980s, including her own hit songs, and in 2013 she released "Marlene sings Donna Summer," which recreated disco queen Donna Summer's hit songs with Marlene's own flavor. The Marlene Super Trio THREESOME, which is a unit consisting of three artists: guitarist Jiro Yoshida, pianist Makoto Kuriya and Marlene, released its first album, "Cubic Magic" which has been favorably received. Furthermore, she is continuing to focus on performing in the filming of acting scenes as well as recording the Japanese theme song "Ai ni nare (To Love)" (composed by Tokiko Kato) for the movie "Karanukan" (starring Gackt) released in 2018.

Marlene's powerful voice combines with the exquisite jazz rhythm arranged by Makoto Kuriya to create an image song with a different essence from the original.

When I performed as an idol, my "Slim Sensation" was adopted as a commercial song for Seiko Watch. Time has passed since then, and now the company has asked me to sing the English version of its image song, which I consider to be a kind of destiny! It is a wonderful song! The arrangement by Makoto Kuriya has made the song reminiscent of something from a dance hall! I sing it with the pleasant sensations I feel. For tomorrow, LET'S SING and SWING!!

In the modern atmosphere created by jazz, the recording was made under the supervision of jazz pianist Makoto Kuriya.
An outstanding song was completed with the resonance of Marlene's voice.