The “Sound of 'Wa' Concert to Support Eastern Japan in a Spirit of Harmony 2016 in Tohoku” was held on July 24, 2016 (Sun) in Kuji City, Iwate Prefecture, on August 21 (Sun) in Aizuwakamatsu City, Fukushima Prefecture, and on September 19 (Mon) in Higashimatsushima City, Miyagi Prefecture.

The concert started with a refreshing choral performance by the Kuji High School Music Club. The Kuji High School Brass Club and the Kuji East High School Brass Club played together, with Norio Maeda accompanying them at the piano. In the second half, special guest Machiko Watanabe came on stage and, accompanied by the jazz-lovers group Kuji Blue Notes and Norio Maeda at the piano, performed famous songs like “Kamome ga tonda hi” to an excited venue.

The concert opened with a Kumagawa Chigo Shishimai dance, designated an important intangible folk cultural asset of Okuma Town and dating back about 200 years. It was followed by performances by children from a local elementary school ensemble and members of a jazz bands who enlivened the stage. After that, the venue reverberated with the wonderful harmonies of special guest vocal group Circus, accompanied on the piano by Norio Maeda.

Members of the Ishinomaki Junior Jazz Orchestra, formed by students from Ishinomaki City, Higashi Matsushima City and Onagawa Town, ranging from 5th graders to 3rd year high school students, performing out of the desire to encourage people in the Ishinomaki area, enlivened the stage. The audience was infused with a sense of unity, clapping and shouting to the rhythmical music of pianist Norio Maeda and special guest EPO.

On March 11 (Sat), 6 years after the Great East Japan Earthquake, Seiko organized the “Sound of 'Wa' Concert to Support Eastern Japan in a Spirit of Harmony 2017 in Tokyo” at Bunkamura Orchard Hall in Shibuya. 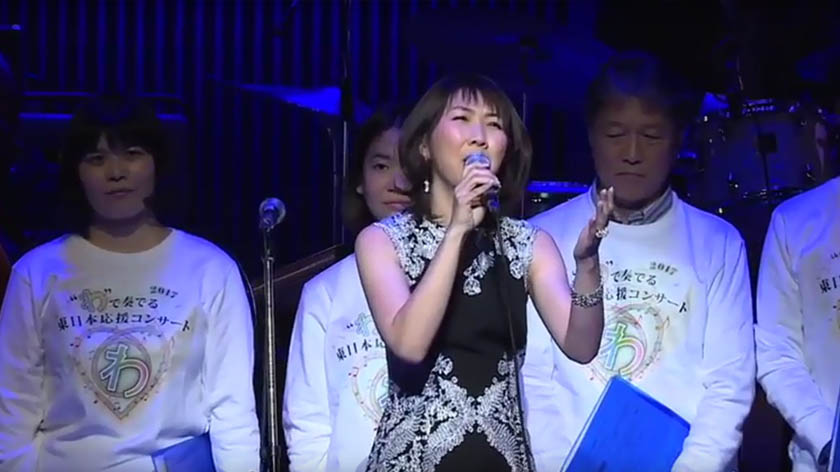 Seiko has been holding concerts to support reconstruction efforts since immediately after the earthquake, both in the disaster areas and in Tokyo, and this edition marked the 24th staging of this concert. Over 2,000 people, ranging from elementary school students to the elderly, gathered at the venue to wish a prompt recovery in the affected areas.

This year too, a great number of artists chose to appear on stage in support of the concert’s stated purpose to "create an opportunity for everyone in the disaster area to be united in spirit with their supporters through the power of music." The role of master of ceremonies was played by former NHK announcer Ryuji Miyamoto.

Norio Maeda told the following anecdote regarding the origin of the concert:, “It all started when, on a visit to the disaster area immediately after the earthquake, I accompanied Group CEO Hattori, who was singing, on a piano that had been partially damaged in the disaster.”

Hanako Oshima, the eldest daughter of Kyu Sakamoto, who had experienced "the sadness of suddenly losing an important person," sang "Miagete goran, yoru no hoshi wo," an hymn to the beauty of life,. Her mother, Yukiko Kashiwagi, who was also present, talked about her connection to Seiko, including the anecdote that Kyu Sakamoto regularly used Seiko watches.

Expressing the determination to continue support activities in the future, Group CEO Hattori, the Always 4-chome Choir, and the Seiko Dancers performed the Seiko corporate song “Moving Ahead. Touching Hearts.” In the final act, the whole venue, united by the power of music, sang "Ue wo muite arukou" together, concluding a concert in which the determination to rebuild was on everyone’s mind.

This year, the heart-shaped “wa” cards written by residents in the disaster area and their supporters decorated the stage, while at the same time the concert was broadcast from the Wako’s store-front window that was similarly decorated with “wa” cards.

Return to Sound of "Wa" Concert to Support Eastern Japan in a Spirit of Harmony.