The “Sound of 'Wa' Concert to Support Eastern Japan in a Spirit of Harmony 2015 in Tohoku” was held on September 15 (Sat), 2015, in Minamisanriku, Miyagi Prefecture, on September 22 (Tue), in Iwaki City, Fukushima Prefecture, and, on October 12 (Mon), in Miyako City, Iwate Prefecture.

The local choir and the sound of the children's sanshin playing enlivened the stage. Special guest EPO's singing and jazz playing touched everyone’s hearts, and audience started clapping their hands happily to the beat.

The beautiful harmonies of special guest Circus captivated the venue, and members of a local jazz orchestra and the elementary school brass band enraptured the audience with their dynamic performances.

A total of about 250 local elementary and high school children (9 classes from 7 schools) enlivened the stage with choir and brass band performances. As the final act, Machiko Watanabe showed off her vocal virtuosity with an emotional rendition of “Kamome ga tonda hi” interspersed with Spanish lyrics. The sound of the audience clapping their hands to the beat reverberated throughout the venue.

On March 11 (Friday), 5 years after the Great East Japan Earthquake, Seiko Holdings Corporation organized the “Sound of 'Wa' Concert to Support Eastern Japan in a Spirit of Harmony 2016 in Tokyo” at Bunkyo Civic Hall.

Seiko has been holding concerts to support reconstruction in the disaster-stricken areas since immediately after the earthquake, and this edition of “Sound of 'Wa' Concert to Support Eastern Japan in a Spirit of Harmony” marked the 20th staging of this concert. 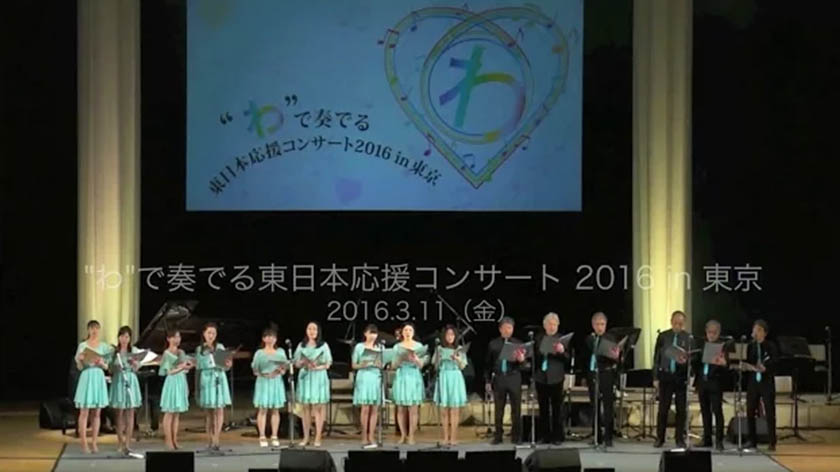 The “Wa” in the name of the concert refers to the ”circle” of support activities, a “circle” symbolizing the joined hands of those who suffered in the disaster and their supporters around the world, to the “circle” of dreams and aspirations for the future, to the “harmony” of everyone coming together to assist with reconstruction, and to the “Japanese essence” of a vibrant Japan.

This year, the “Wa” Message Cards carried the thoughts of residents in the disaster areas and the words of encouragement from supporters, and the 6,000 cards sent from schools, companies and disaster areas throughout the country were used to decorate the stage of the concert.

The concert saw the participation of guests like Norio Maeda and Windbreakers, Marlene, Junichi Inagaki, Midori Karashima, Machiko Watanabe, Circus, and EPO, and the stage was filled with the hopes of artists wishing a swift recovery.

At the end of the concert, the audience and all the performers united to sing “Hana wa saku” together and deepen the bonds of “Wa.”

The concert was broadcast in the Wako’s store-front window which was decorated with “'Wa' Message Cards”.

In the future too, Seiko will continue to support recovery efforts through music in close contact with disaster victims.

Return to Sound of "Wa" Concert to Support Eastern Japan in a Spirit of Harmony.